I am writing this somewhere over the Atlantic, as I fly the first leg of my journey to Maputo. This will be my first blogging experience, one that I already find somewhat difficult. It’s odd for me to write in the first person, as generally I feel most comfortable focusing on characters and stories — certainly not myself. I suppose there’s a reason I chose a life behind the camera instead of in front of it.

My days leading up to departure were intensely busy, and I certainly neglected a lot of people and responsibilities as a result. I was gathering, testing, and packing video equipment for this trip, rewriting a screenplay, creating a new one, and coordinating the upcoming release of my first feature film, PADRE NUESTRO. So I am quite looking forward to the focus and purpose that will come with our project in Mozambique, as I think it will offer some badly needed space and perspective.

I am thrilled at the prospect of encountering the unknown these next two weeks, yet I am also quite apprehensive. It’s been over two decades since I last visited East Africa (my place of birth), and I am not quite sure how the radical transformation of the Sub-Saharan region will affect me. My memories are indelible, yet they have become more and more incongruous with the news stories, images, and reports from friends over the last twenty years.

I hesitate to make any generalizing statements about the dual epidemics of poverty and disease in Africa (especially HIV/AIDS), before engaging those realities in person. We all know (I hope) the numbers, the statistics, the tolls. But I am not sure how much we’ve transcended that data and seen the human dimension that constitutes it.

Ironically, it seems to me, in this world where we have more and more access to each other via the new media, we spend less and less time truly connecting with others. The result has been a reduction to — and reliance on — labels. Perhaps it’s a tool for managing the overload of stimuli we receive, or perhaps it’s a way of coping with difficulty, or perhaps we really don’t care about our neighbors after all. But with the labels come a simplification; a reduction of humanity.

One of the greatest things about film is that it speaks the universal language of human emotions that transcend cultural boundaries. I hope that by empowering a child to learn basic filmmaking, we can give him/her the tools to capture those emotions, and the power to speak that language. Though the clamor of our busy world will no doubt drone on we can help add a child’s voice to that din, and just maybe, open up a new conversation.

And we can listen.

Before I end, I must thank Neal Baer and Holly Carter for extending me this great opportunity. It’s not often in life you get to share your gifts in order to empower others. Success has no better reward.

Today, Chris Zalla, a writer and film director who won the Grand Prize at Sundance this year, and I chose Alcides Soares to make the film. Chris and Zego, a Mozambican documentary filmmaker, taught Alcides the basics of filming. We selected him because of his passion for storytelling, his wry sense of humor, his great eye, and his drive. He’s sixteen, he wants to be an engineer (and now a photographer) and he wants “to tell stories about hunger.” We took him and all the kids to a restaurant yesterday. I asked Alcides if he’d ever been to a restaurant. “Never,” he said firmly, but then smiled, “this is a very good start.”

Yes it is. Alcides will take us to his home, where he lives with his younger sister and an elderly woman in a wheelchair. She gives him a small place to live and he cares for her, cooks for her, cleans for her — and goes to school. Alcides will tell his what his life is like, through his movie, in a way an outsider couldn’t.

Alcides’s film will be part of five documentaries made by kids and mentored by renowned filmmakers.

And this documentary would not have been possible without the support of my dear friends from SVU: Mariska Hargitay, Chris Meloni, Dawn DeNoon, Jon Greene, Amanda Greene, Mark Goffman, Josh Singer, Paul Grellong, Kam Miller and Ken Storer. They bought the Canon high-def camera Alcides is using. I am so grateful.

All my best,
Neal

We are having an amazing time; Alcides is a genius. He’s compassionate, wise and has more penache than any 16 year I’ve met. He’s recorded intense conversations with his “grandmother,” an elderly woman who gives him a place to sleep in exchange for cooking, cleaning and caring for her small home. He interviewed his sister today — moving — she doesn’t know their father died of AIDS. Alcides also interviewed a friend, only to discover for the first time today that he is an AIDS orphan too. He’d told Alcides that he had a secret to share; today he did. We’ve seen him film an impromptu singing rehearsal for a wedding in someone’s yard; the dusty streets of Maputo; his experience eating in a restaurant. His sense of humor is contagious, and he’s developed his own documetary style by framing a shot and then entering it so that he sits beside the person he’s interviewing. Tonight he has the camera at home — we left it with him! — and he’s doing a visual diary of his life. Tomorrow he talks to other AIDS orphans who are part of the The House Is Small project.

Zego is a Maputo-based filmmaker. In this video-subtitled audio interview, Zego introduces himself and talks about the importance of letting the children be the tellers of their own stories.

We had a great day again. We call Alcides “Little Oprah,” because he shoots interviews at first behind the camera, then pulls up a chair and talks to people right on camera. His personality is lively; his questions direct and often suprisingly sharp. Alcides also interviewed a family of six AIDS orphans who live on their own. It’s heartbreaking, but these kids are resilient. 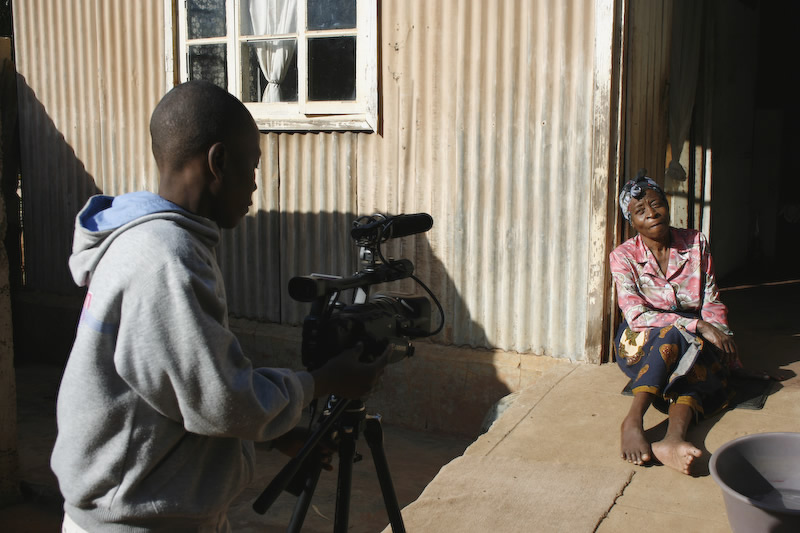 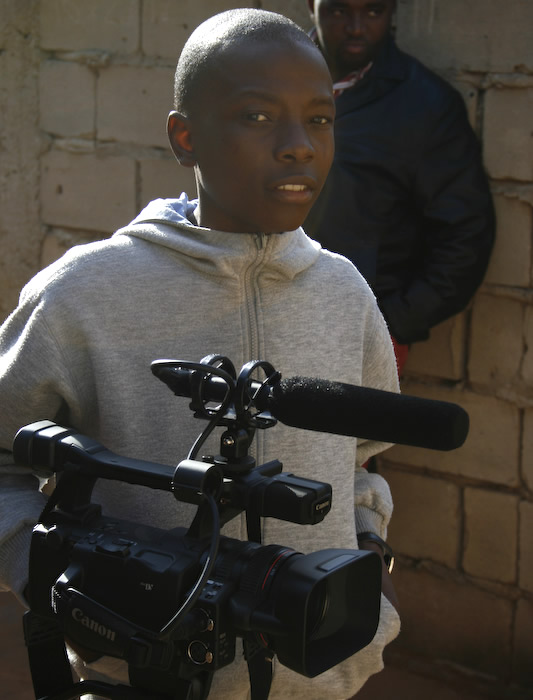 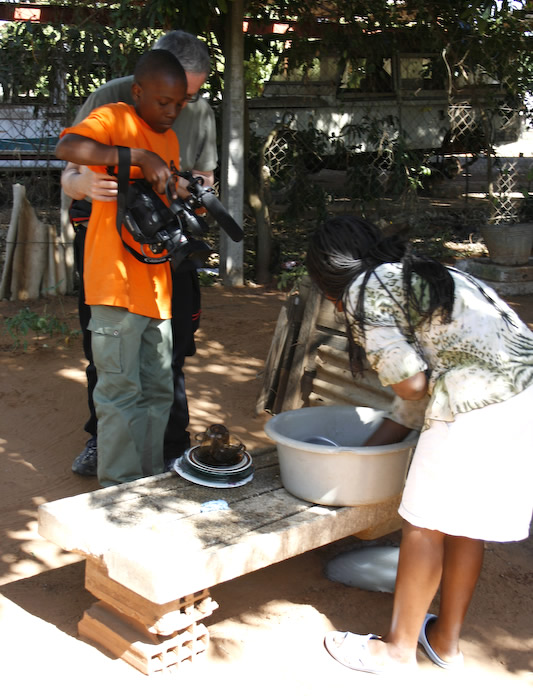 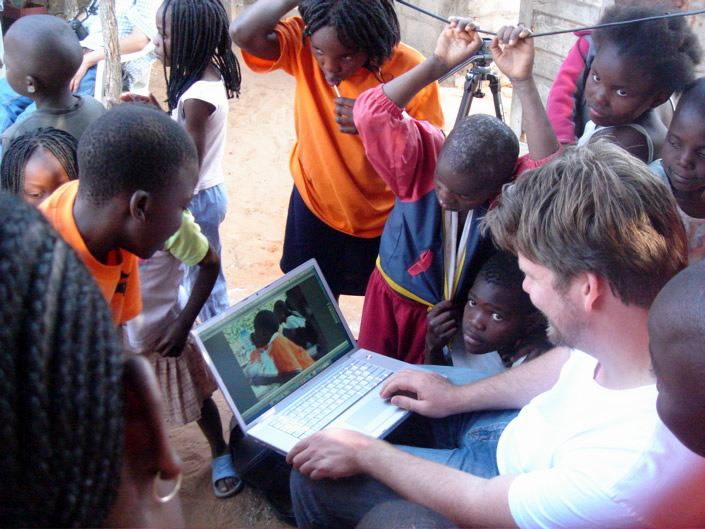 Holly Carter, BYkids Founder and Executive Director, talks to Alcides Soares in Los Angeles in February about his experience making his film. This interview is edited by 13-year old Danny Casale.

Home Is Where You Find It