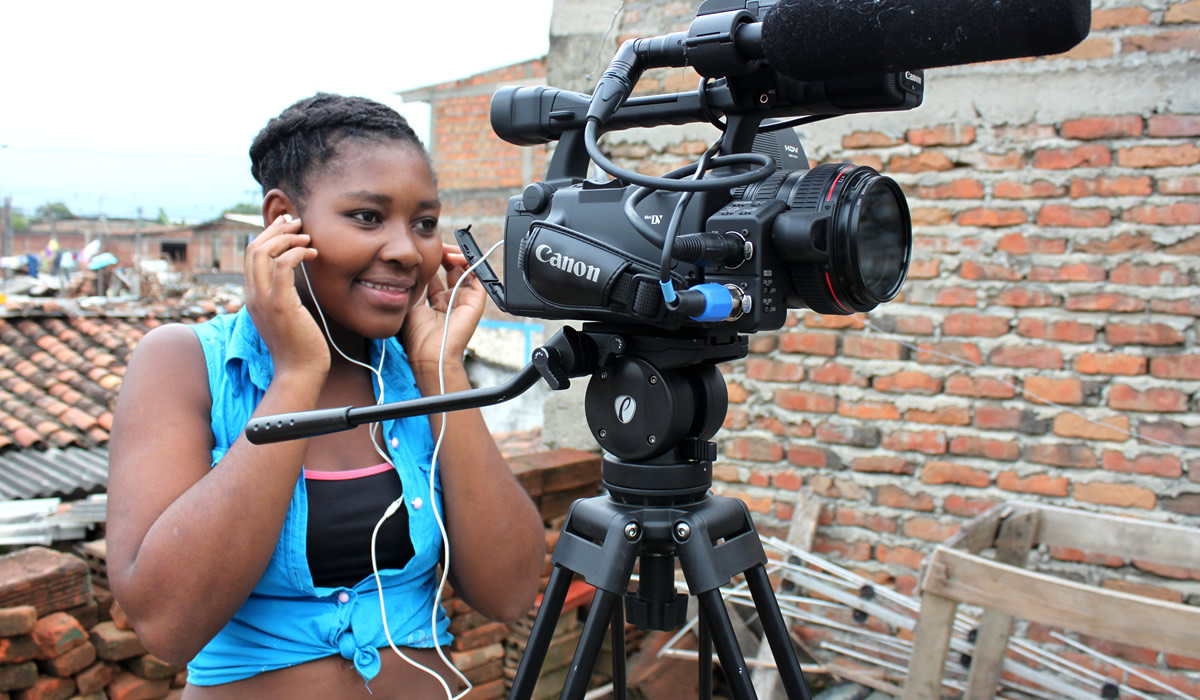 We picked our filmmaker!

María Ceballos Paz is 16 years old and was born in Nariño, Colombia – a rural area in the south. She and her family left Nariño due to the violence when she was about 7 years old. Her mother told her they were going on vacation and once she got to Cali her mother told her that her father had been killed by guerillas and that they were not going back.

She moved around a lot when she first arrived in Cali, and now lives in Manuela Beltran in the Aguablanca district of Cali. There are 13 people living in her home — her mom, one sister, two brothers, a sister-in-law, three nieces and nephews, two cousins, and her aunt and husband.

María goes to school in Aguablanca everyday from 7-12. She is in 6th grade, likes to study English and computers. She loves to compose music and sing when she gets home from school. Dancing is like breathing – she and her family dance all the time. It is her passion and is part of everyday culture.

She observes everything we do and is picking it up quickly. María is very comfortable with the camera and her work is improving daily. She and her entire family have been incredibly helpful and excited about this project.

On Thursday, María and her mother attended a community weekly meeting at a church in Aguablanca. María’s mother is well known and plays a big part in these Thursdays meeting. The meeting is called “Jueves de Paz”, which means Thursdays of Peace and is attended by many of the displaced people within the community. It is a forum for discussing and addressing problems that they are experiencing as a result of being displaced. 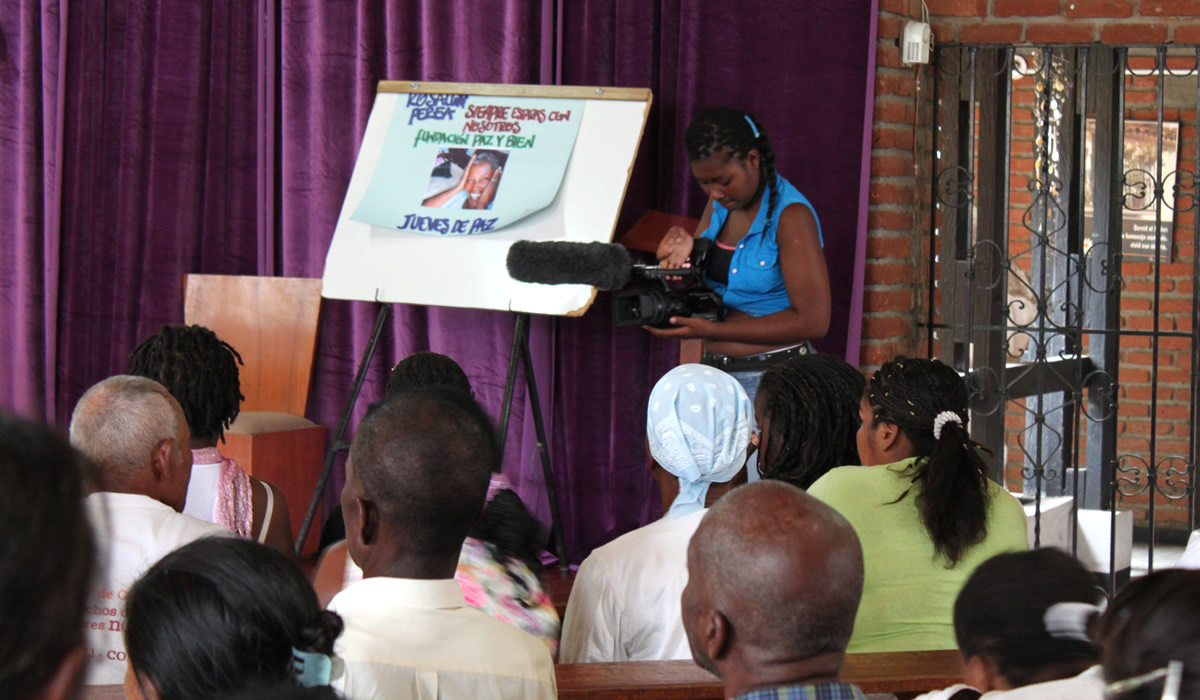 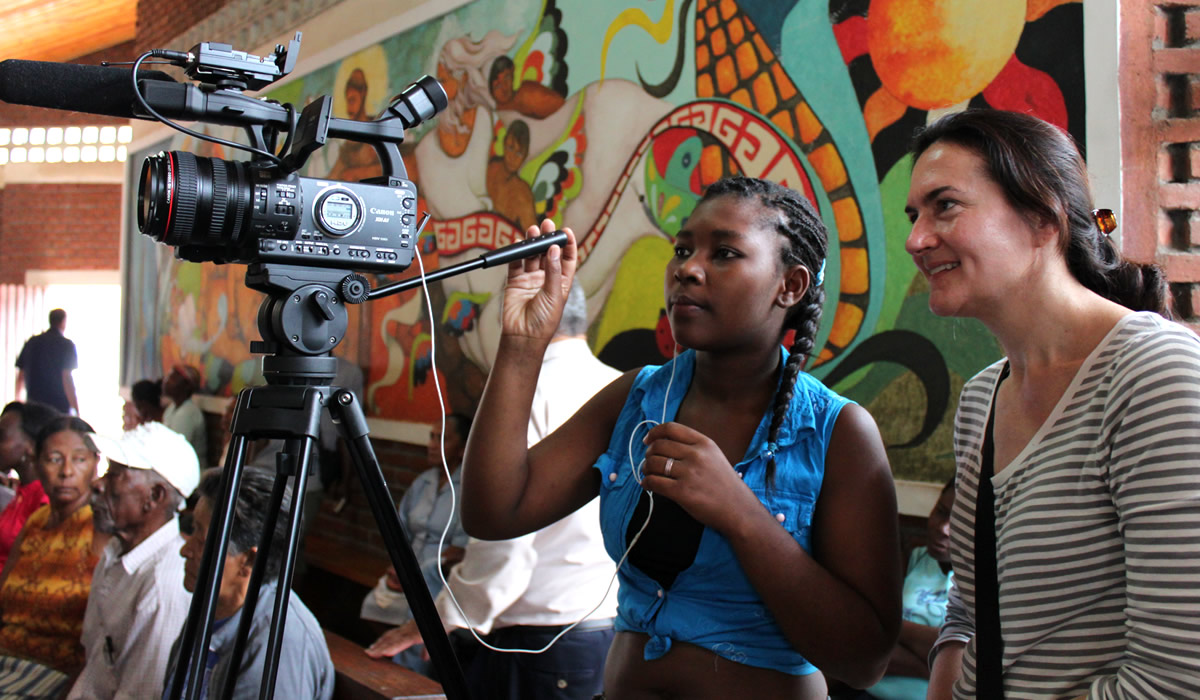 The church was full, and María set up the tripod and shot the introduction to the meeting in which Sister Alba Stella introduced both her and the project. She later roamed the crowd shooting hand-held in order to get a variety of shots. She was so comfortable moving throughout crowd. 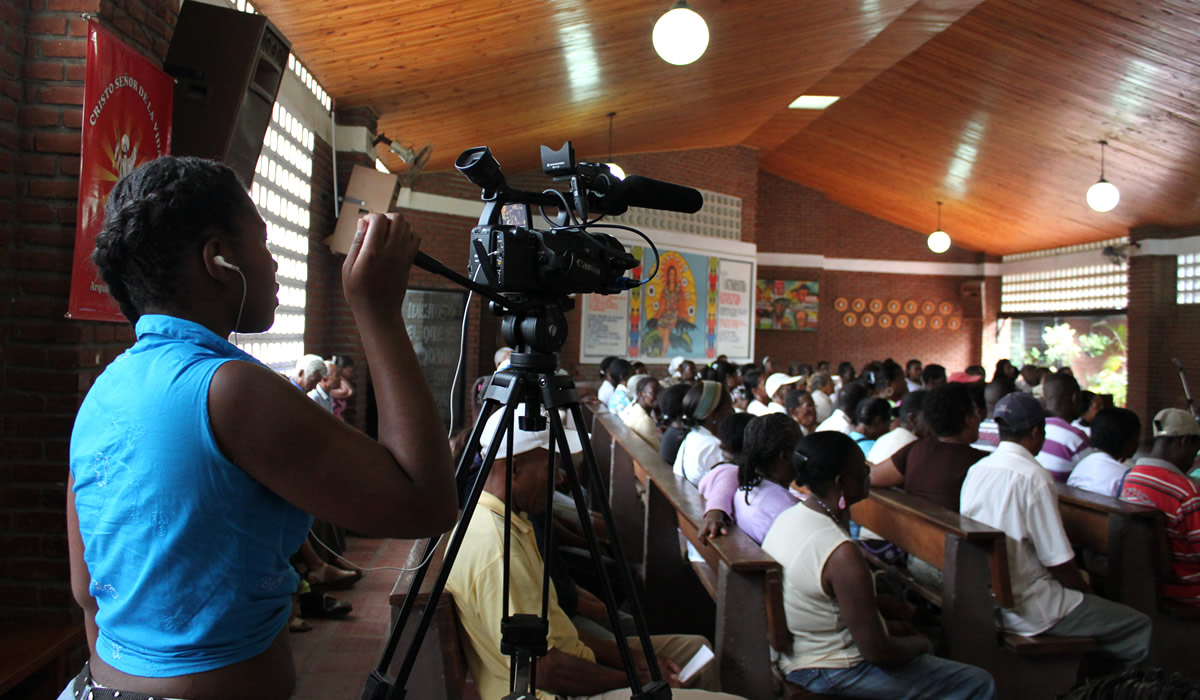 The meeting was quite moving when the Sister asked those who have been newly displaced to raise their hands. Some discussion followed with several people discussing problems with the government and its lack of support for the displaced.

After the meeting, María interviewed several of the displaced people who had attended. She interviewed an 85-year-old man who had been displaced just two years earlier. It was interesting getting the perspective of the displaced elderly. He said he couldn’t remember a time without violence. She was also moved by the story of a 40-year-old friend of hers, who told her that his father and brother were killed by the guerillas and that he just had to keep going because he had a family to support.

It was quite the busy and emotional day for María, as she heard sad stories from other displaced people, as well as new stories from some of her friends. 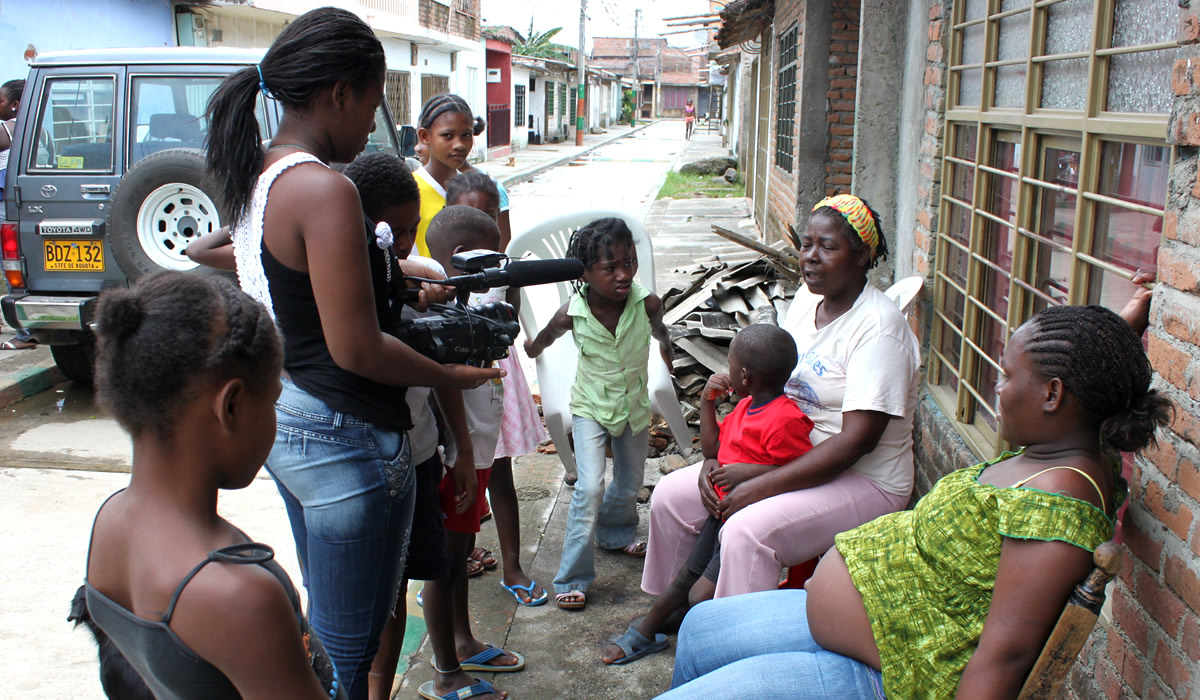 Over the weekend, we spent both Saturday and Sunday with María and her family. When we arrived at her house on Saturday morning, we met María’s cousin Myra, who had a Band-Aid on her head. María’s younger brother Fidel and Myra told us what had happened to them on their bus ride home from school just the day before. As the bus was driving through one of the worst areas of Aguablanca, someone threw rocks at the bus. Myra said that the window was open and one of the rocks hit her in the head. There were other young boys and girls in the house while we were filming, and María asked them to talk about how they felt about the violence. They all said that it can happen at any time, and it is not unusual. Most of the kids were under 10 years old and seemed quite used to it. 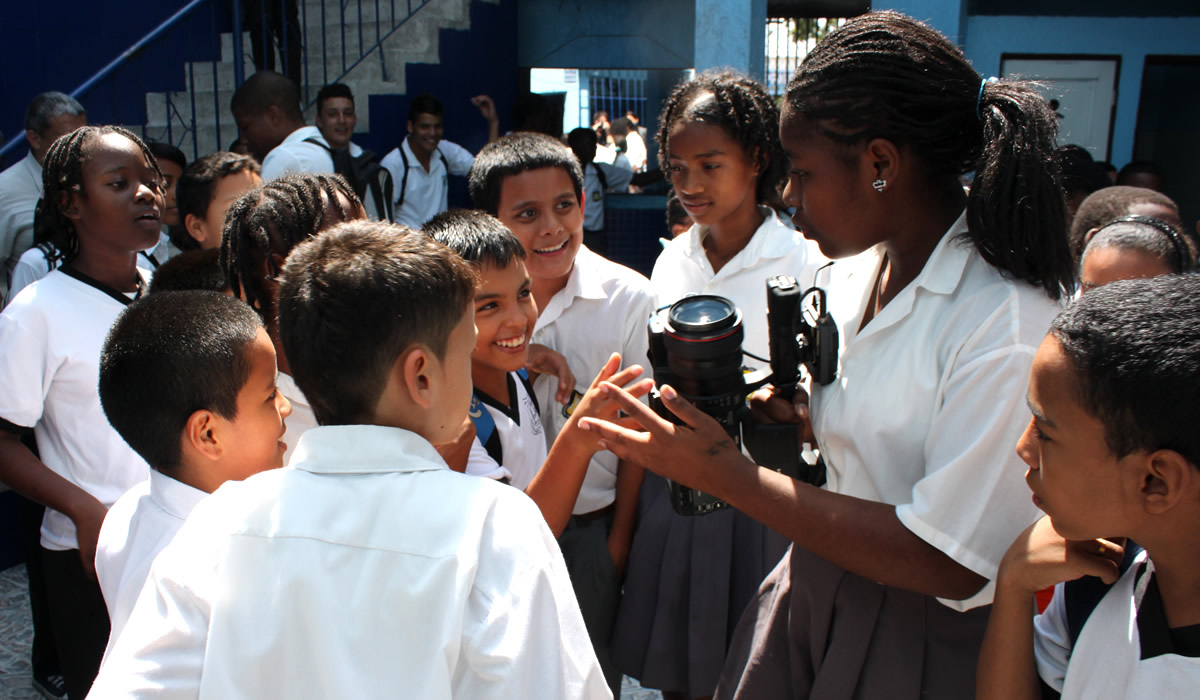 Today we went to shoot at María’s school. This week is exam week, but when we arrived at the school all of the kids were in between classes and the hallways were packed. María was swarmed by kids asking questions, checking out the camera and following her at every turn. It was chaos, but fun and quite entertaining. Once it was time to return to class, María set up the tripod and filmed the test taking and conversation that followed. The fun began once the class was dismissed and some of the kids stayed behind to talk to her. She asked them what they wanted to do when they finished school and soon the kids broke into dance and song. 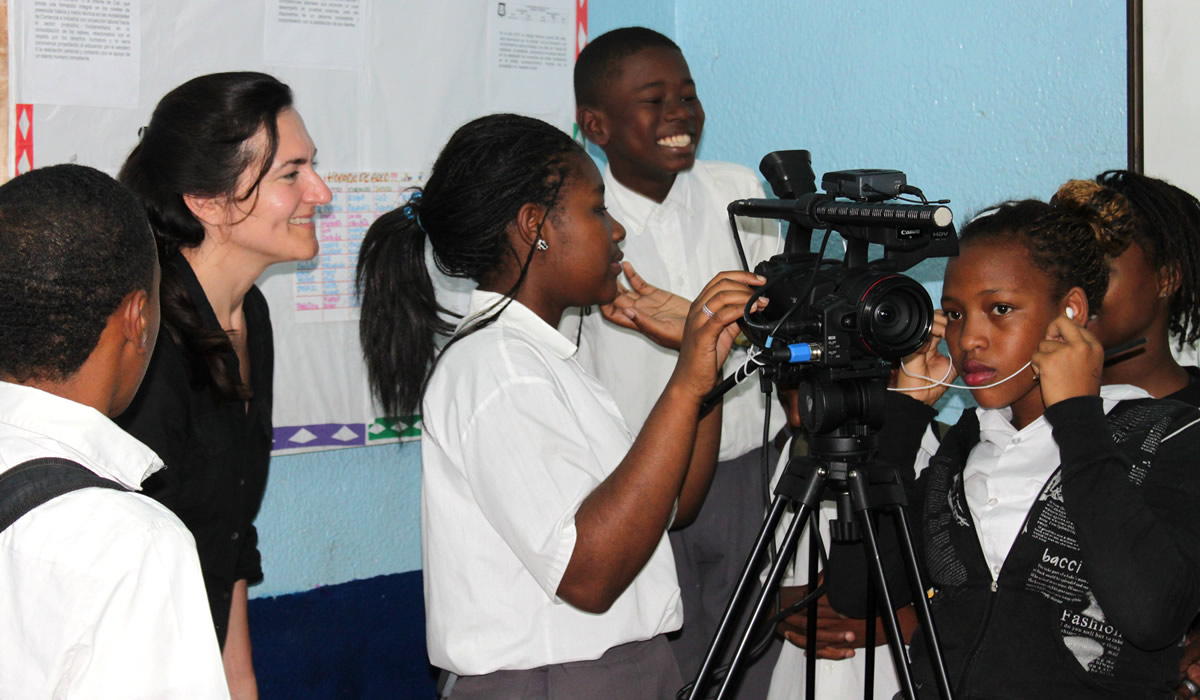 After class María interviewed one of the teachers that had given her great advice at a time when she was quite down. She sat next to him and told him why he was like a father to her and that when she was at one of her lowest points he had given her advice that has helped her through many hard times. He told her to never look back, and never give up. Always move forward, even if there are obstacles. During my past two weeks with María, she had mentioned this teacher and the advice he had given her on several occasions. After the interview, she said it was one of the most emotional moments for her. It was great to see her interview him and tell him how she felt.

Displaced But Not Defeated